Some are dead, and some are living *

Posted on February 17, 2016 by bathwellschap

Synod worship in London is always slightly odd (the building is not exactly designed for it), and nearly always very moving. Wednesday began with a Eucharist, and we were observing the martyrdom of Archbishop Janani Luwum, killed by President Amin’s regime in 1977. (I am old enough to remember the shock that went round at St John’s College Nottingham when the news came round – he was a former student of the College.) Archbishop Justin preached about Luwum and the Libyan Coptic Christian Martyrs (killed a year ago this week). In the manner of their deaths, they showed the  glory of God. You can read his sermon here.)

20th Century martyrs at the Abbey 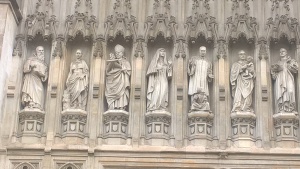 Janani Luwum in the company of Bonhoeffer, Kolbe, Romero and others (click to enlarge)

Walking into Church House you go past the busy, touristy West Front of Westminster Abbey. Not many people lift up their eyes to observe the statues of the 20th century martyrs that were put there as a Millennium project. Luwum stands there – a reminder, for those who care to look.

Something beginning with ‘R’…

If you have been keeping up, you will know that I talk about R’n’R here. Originally, it stood for Reform and Renewal. However, nothing stays the same, and it’s now official that this extensive programme is to be called Renewal and Reform. Fortunately, that means we can still talk about R’n’R. So that’s all right.

There is, inevitably, an R’n’R website area. It’s confused about what order the ‘Rs’ come in, but if you want to follow things through, click here.

The main R’n’R debate was about RME – how we fund ministerial training. (Read the paper here.) Behind the controversy is the rather curious arrangement by which ordination candidates are discerned, funded and trained.

That’s why any changes to the funding system are very complex and can have significant, if unintended consequences to any of those three parties.

Synod from the gallery (on a not-so busy day)

The chamber was packed from beginning to end. Such is the level of interest that when your correspondent slipped out after an hour and a half, I found just eight people in the tea room. The real ‘battle’ was an attack by the people involved in TEIs – tutors, principals, etc who had some heavyweight contributions criticising the Bishop of Sheffield’s proposals. It got quite tense – there was loud applause and support for their criticisms. They referred time after time to ‘unintended consequences’ with helpful references to tumble-dryers and Warburton’s bread. (You had to be there.)

But when it came to the vote, the most radical amendment was thrown out, and the Bishop accepted the less radical one, which does at least commit the central church to better consultation with TEIs and dioceses. The motion as amended was passed, and one can only hope that the central powers that be do enter into a better relationship with the TEIs as partners as the changes go through. It was a great Synodical occasion, for new members the first time a proper debating battle has happened. There will be others, don’t worry.

When benefits are cut off…

The morning’s debate was an absorbing one about the effect of sanctions on benefit claimants. You can read the supporting paper from the diocese of West Yorkshire and the Dales here and the paper from the Mission and Public Affairs council here.

This was an example of a diocesan synod motion that was timely and caught the mood of the Synod. An electronic vote was called, with 320 votes in favour and none against. Press reaction will be interesting.

I’ve noted the ever-present undercurrent of discussion and lobbying about human sexuality issues during these brief February sessions. Something that will add to the conversation is the release of a six-page letter to Jayne Ozanne from Archbishop Sentamu on behalf of both Archbishops.

In other news… Should you be a Synod member reading this, I look forward to seeing you in York. And I encourage you to respond to the consultation in GS Misc 1133 before the closing date. Please? Pretty please?

*Some are dead, and some are living from In my life, the Beatles, Rubber Soul, 1965. A winsome Lennon-McCartney number with that ground-breaking harpsichord middle eight.

8 Responses to Some are dead, and some are living *