Where do you go to, my lovely?

Posted on February 16, 2017 by bathwellschap

Demonstrators and lobbyists greeted us this morning. The anticipation of this afternoon’s debate on the legendary report GS2055 was such that the other routine business of the morning passed by without huge enthusiasm or controversy. Eyes, ears and prayers were on the big event. I previewed the report earlier this week, if you need to catch up.

So I report only in sketchy form that the Synod agreed with the diocese of Leicester’s request that a new Bishopric of Loughborough should be created. Bishop Martyn Snow made much of the fact that an extra episcopal pair of hands would mean the diocese could focus much better on the multicultural and multi-religious opportunities presented in the city and the diocese. More details of the biggest thing to hit Leicester since Richard III (and football) are here.

Next was a debate about the evils of Fixed Odds Betting Terminals. There was unanimous support for a London diocesan motion which condemned the way these machines are operated and regulated, with some terrifying tales of gambling addiction and the effects it has on some lives. You could tell the betting companies are worried about this (there is talk of government action) because they wrote to all of us giving their side of the story. Unpersuaded, Synod voted unanimously in favour. You can see the  paper here and the background briefing here.

And then the last thing before we got down to human sexuality was the unfinished debate about clergy robes. To my great delight, the Canon was accepted through to the final stages with speeches from both ‘low’ and high’ church people speaking in favour of this ‘permissive’ measure.  With it went to formal changes to permit authorised funeral services to be used for someone who has taken their own life – a humane and pastoral change that was long overdue.

Then it was time to begin. The work came in three parts

1. The introduction: Norwich and Willesden

It sounds like a building society, but it was these two prominent Bishops, one evangelical and urban, the other liberal catholic and rural, who fronted up the first steps at tackling GS2055. Graham James, Bishop of Norwich charted the Church of England’s journey on same-sex matters. Surprisingly to many, it is a long story. Bear with me…

But then society changed fast. In 2005 Civil Partnerships came in, and same-sex marriage very recently. And the Church has not responded coherently

Pete Broadbent, Bishop of Willesden’s task was to set us up for the rest of the day’s discussions. He confessed that like many he did not enjoy group work, but he was there to explain and commend the group work and the debate that followed. He apologised for the hurt that had been caused to many by GS2055. He said:

He appealed to people with reservations to come to the groups and participate. His speech described the fault-line underneath this debate: that there is no meeting of minds between those with different understandings of scripture. Unlike women bishops, where we coalesced around an end-point – everyone accepted there would be women Bishops – and it was a question of how. On this matter, we have no potential shared end-point. So we need to do a lot more talking. You can see the two Bishops’ morning speeches in vision on YouTube, or you can access their texts here.

2. Off to the groups 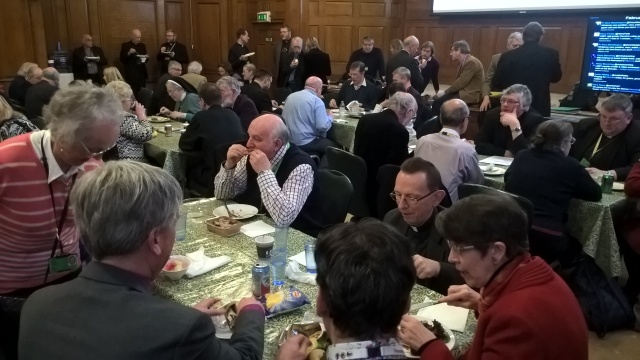 There was a huge buzz of conversation as we broke at 11.45 for an early lunch. I’m sure I heard someone say I agree with Pete – shades of 2012. And I certainly heard someone else clearly changing their mind about boycotting the groups. The Lunch room was heaving with people eating and talking. Then we went off to group work, conducted under the St Michael’s House Protocol that we used during the Facilitated Conversation at York last year. I can say:

The GS2055 follow-up questions (para 70) for discussion of the specific areas proposed for new work might include:

Back in the main hall, Graham James returned to introduce the formal debate. He said the changes in recent years means we cannot separate out what we say about marriage from what we now need to say about same-sex relationships. Thus there is a need for a new teaching document: we have nothing up to date. And what are saying at present is seen by many as discriminatory. The gospel does not get a hearing if we are seen as lacking in love.

The hall was heaving for the whole time of the debate

Finally he said that history shows it takes many years to come to agreement on doctrine. And it also shows that in every era there are issues which of themselves may not be so significant, but can become touchstones and cover for other disputes.

More than 100 people had asked to speak. It was a two-hour succession of quick-fire comments (the speech limit was three minutes per speaker) Some key speakers made an impact on me:

After a procedural delay (for a suggested adjournment), the tension went up as Archbishop Justin rose to speak. He seemed to be working from hand-written notes, and called for some radical new thinking about the whole of human sexuality to be part of what comes next.  His soundbite was ‘there are no problems, only people’. Procedurally, he said, whether we take note or not, we will move on to find a radical new inclusion based in love based in our Christian understanding, not careless in our theology, but aware of the human race around us. We will seek to do better

– we could hardly do worse. You can see a version of his remarks on his website here.

Summing up, Graham James indicated the depth of our disagreement: we even disagree what we disagree about, and he said many speeches illustrated that.

A nice Synod nerd point arose here as he also addressed the fallacy that ‘not taking note’ equals rejection. If Synod members don’t understand their own Standing Orders, no wonder the world outside thinks today’s debate is simply in favour (or not) of same-sex marriage. Then we had some nice wrangling about what sort of vote we should have – of the whole Synod electronically (so names would be recorded), or by houses (so the strength of support in each House would be apparent and the whole thing might fail). By houses was decided, and the result was:

So the Take Note Motion failed. Although had it been a count of the whole Synod, it would have been won, 242 – 184!

So what have we learned? These are my purely personal observations:

Well, in theory there is no follow-up to the motion, since it was thrown out. In practice, the Bishops will very quickly get their reflections group together, I suspect, and chart out a way to respond to the very clear messages from Synod. To do that they’ll have access to all the speeches made, and to the (anonymous) suggestions about the GS2055 bullet points. Whether that results in something new at York in July, or some more deep group work in July, who knows?

Eagle eyes will have noticed that the vote in the House of Bishops was 43-1. So who was the odd single vote against? Given that GS2055 was a unanimous document, and the Bishops showed immense solidarity all the way through, a hunt for the traitor was launched straight after the vote. My sources tell me that the vote against was the result of what is technically known as EFT Syndrome – ‘episcopal finger trouble’: a Bishop simply pressed the wrong key on his/her voting machine.

There are names being mentioned, but as I only have this second-hand, I don’t think I can name the guilty man. Or woman, as the case may be.

UPDATE The Bishop of Coventry, Christopher Cocksworth, has ‘fessed up to being the errant Bishop.

* Where do you go to, my lovely? Peter Sarstedt’s sad song of a little society girl who lost her way,  1969. He was the guy with the moustache. Sad to report, he died last month.

6 Responses to Where do you go to, my lovely?