But then you know it’s time for them to go *

Trying to sum up the last day of a Synod is really difficult. Not least because you get into a rush getting away and heading for home. But today was the last day – not just of this session, but of a five-year term. For me, the end of ten years!

And it was an atypical day, because we began with two hours in (not very) small groups, and ended with a Communion service in the rather 70s environment of the main hall.

Group work at Synod doesn’t have a great reputation. Some members always stay away, but in recent years attendance has improved. This is partly because we now stay in the same groups from year to year, so there is a bit of a bond (and a bit of embarrassment when colleagues spot you haven’t turned up.)

There is no ‘Planet B’

Fortified by Paula Gooder’s high-grade input last night, we integrated worship (saying the Benedicite and Psalm 8 together) and discussion. My group was fortunate to be led by the Bishop of Manchester (David Walker) and we covered a huge range – the nature of the Fall, religion and science, globalisation and consumerism. That paved the way for a heavyweight debate about how climate change could be combatted. The Bishop of Salisbury led it with a calm passion – best soundbite “The only reasonable approach to climate change is to act now. There is no Planet B”.

Despite unanimity (and a complete lack of noises from ‘climate change deniers/sceptics’), there was a nice little bit of Synod wrangling. The original motion committed the parishes and dioceses to ‘encourage’ prayer and fasting on the first day of each month. Archdeacon Jan McFarlane from Norwich put an amendment saying said this was an unwise call: we would be setting ourselves up to fail. The press would simply ring round on the first day of any month and find a story about all the parishes and Bishops who weren’t fasting. (This ties in with my own failed attempt to cut out a similar push for parishes and dioceses to deal with the WCC ecumenical paper (on Saturday)

Women and the episcopate is back!

The fuss over legislation having died down last year, and the first 6 women to be consecrated Bishops now being known (Libby Lane, Alison White, Rachel Treweek, Dame Sarah Mulally. Ruth Worsley – coming to us as Bishop of Taunton! – and Anne Hollinghurst), you might think it was all over. But regular readers will remember that the House of Bishops have ‘Five Guiding Principles’ to ensure all shades of theological view within the church can flourish; and a Code of Practice governing the way in which parishes who can’t accept the ministry of a woman Bishop are treated. There is provision for an independent adjudicator – a kind of Ombudsman – who can intervene if a parish feels its own Bishop is not dealing fairly with them in these matters. The person chosen is Sir Philip Mawer, a former Secretary-General of the Synod. He is someone who knows the Church of England backwards.

He arranged a fringe meeting today so that members could discuss any issues about how this will work with him before he issues his final guidance on the matter in the autumn. The room was packed, and anyone who had been anyone in the passing of the legislation was there. There were some pretty sharp questions, some revealing ignorance of how the thing was meant to work, others probing about grey areas. Some examples:

Sir Philip did not attempt to give answers, but simply said he was collecting views in order to help him get his final guidance right. By and large, I felt people were well satisfied, and huge trust in him was expressed. You can read the current draft here, and he is open to comments for a couple of months.

What are the NIBS?

The latest piece of Church House jargon is NIBS – the church’s National Investment Bodies We returned to the environment after lunch, with a complex motion about the NIBs, and what they should do to further environmental objects in their investment policies. There’s been a huge amount of work across Church House, the Commissioners, the Pensions Board and the Ethical Investment Group about this. Bishop David Walker stressed that this was still about investment, not just about ethical objects. (You can read the background paper here)

There was much to be in favour of, but I made what a colleague later called ‘a brave speech’ (I think he had Yes Minister in mind) in which I tried to point out that it’s not a very simple thing to dol. I had picked up on a reference to the Church Commissioners getting involved in building solar farms on their land, so I described three solar farms that have sprung up within 5 miles of my house in Somerset. They raise issues like:

All in all I just wanted to put down a marker that we cannot assume solar farms are automatically ‘green and good’. I acknowledged that I have panels on my own house – they subsidise my electricity bill very healthily, thank you. But large-scale land use of this sort proves there are no easy green solutions. It was well applauded, but it was the only speech (I think) that significantly asked any questions about the policy. (A later speaker did remind me that intensive farming – agricultural, not glass and steel –  also raises serious environmental issue.)

Show me the way to go home… 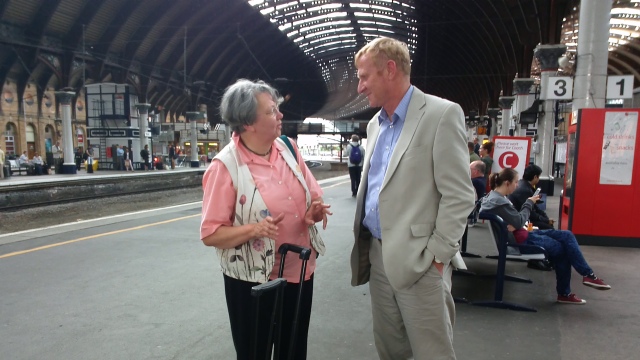 Then it was time for formal farewells, and plenty of them. The Chair of the House of Laity and the Prolocutor (chair) of the Canterbury Convocation are both leaving after many years in Synod. (There will be some very interesting elections in the autumn to replace them). Archbishop Sentamu told us that there were 99 people known to be standing down, including such luminaries as Fr David Houlding and Christina Rees, key people in the long haul to the ordination of women as Bishops And there will of course, be others, who don’t know they are leaving Synod, but will be told, rudely, by their diocesan electorate this September/October.

And then there are other members who have not yet decided whether to stand for re-election. I think I am in that category. If you have read the blog this far, you will know I hugely enjoy Synod and feel a compulsion to share that with other people like you. As I said in a particularly introspective post last year, the purposes of this blog are

The time is nigh! Talk to your Diocesan Secretary and s/he will have the timetable. Or look at the really helpful info here.

I am amazed at how this blog expands its readership. My preview post on Friday morning had 51 visitors. Saturday that had grown to 85; Sunday’s total was 96, and by lunchtime today (Monday) it had shot up to 202. Nearly all are for the UK, but I appear to have single readers in Russia, Oz, the Philippines, Uganda and the USA. Oh, and three people in Turkey.

We concluded with a Communion service in the main hall. It was good to end in prayer together. As I have said before, Synod worship is always moving: a sense of being among friends, but also of being wrapped up in the purposes of God for our church. It was heightened by the sadness of parting friends. As the song from which I pinched today’s title says: Sad deserted shore, my fickle friends are leaving. Ah, but then you know it’s time for them to go.

I can’t quite believe I have spent ten years of my life on General Synod. Where did it all go?

Anyway, as that plummy-voiced man used to say on the old Home Service: ‘if you have been, thanks for listening.’

* But then you know, it’s time for them to go: a line from Who knows where the time goes? Fairport Convention Unhalfbricking 1969, vocal by the incomparable Sandy Denny. Several versions around – click here for one