Posted on November 23, 2015 by bathwellschap

One of the interesting things about this Synod is that half of the lay and clergy membership are new. So – despite all the interest groups claiming they had a good election – no-one really knows how the new Synod will behave. It may be full of hard-liners (from both camps) on human sexuality. It may be a place where peace, love understanding and charity are overflowing in every debate, fringe-meeting and tea-room conversation. Or it may not… 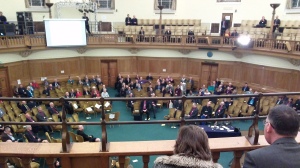 A view from the gallery

The mood music for this Synod is also interesting. There’s been a bit of a charm offensive on behalf of the Reform and Renewal programme (hereinafter referred to as ‘RnR’). Some would say this is simply to help new people get their heads around what is actually a huge change of gear for the dear old C of E. Others, more hard-bitten and suspicious, will see it as the ‘platform party’ of Archbishops’ Council and others getting their retaliation in first, anticipating some sharp criticism.

None of which anyone would argue against. But as I said, the RnR devil is in the RnR detail.

Today is an induction day: largely aimed at new members, but quite a few old lags will be there too, including yours truly. In the past I’ve found it helpful to meet some new people before we get into agendas and timetables. And I suspect nervous Synod newbies find the immensely helpful briefings from the Synod staff will calm nerves and help them feel less at sea than would otherwise be the case.

Wonderfully, the Grauniad’s/Observer’s new-ish Religion Correspondent, Harriet Sherwood, has done a Synod preview piece! Such things have all but disappeared from serious newspapers, so it’s good to see a reasonably dispassionate look at what’s ahead. She has interviewed some of the usual suspects, but it’s none the worse for that and will inform non-Churchy Grauniad/Observer readers, rather than upset them or merely reinforce their prejudices. It’s well worth a read, here.

2010 picture: The Queen addressing the Synod

The presence of the Queen and Prince Philip means that the first day of Synod will feel overshadowed by  ceremony. Which is a pity, as even allowing for the fact that we have lots of new members (see below) and it’s a short time, there is some serious business to be done. The royal involvement is important (though irritating to Synod’s small soft republican members) for two reasons.

Then there’s the business. Squeezed into the two days. As I said above, around half the members (47% to be exact) are new this time. So:

What we can’t tell is what these changes will do to the groupings on Synod. “Inclusive Church” ran a pretty focussed campaign to get people to stand, and (by circulating lists) telling like-minded people who to vote for. It felt more like a party (in the parliamentary/political) sense than we are used to, where the evangelicals, Catholics and others have their groupings, but have tended not to issue ‘party lists’.

In their post-election statements, the various grouping have all more or less said they did very well. We shall see what that actually means when we got to some votes on key issues. Which won’t be this week – the agenda is interesting, but not full of ‘evangelical ‘inclusive’ or ‘Catholic’ issues.

In my time (2005 to now)there’s been a huge change in how Synod tells the world about itself. And how Synod members talk to each other. Reading other people’s blogs is a decent way of getting some perspective.

It’s in the nature of blogging for people to be rather stop-start about when they post anything.

So the list here is no guarantee that there will be up-to-date stuff: but I suggest:

Twitter, of course, if a whole different thing. Some members tweet away all day during sessions: others are more episodic. Some have nothing to do with it! But a lot of non-members follow the ‘twitter stream’ from home or place of work, so it’s a very immediate way of keeping in touch.

Synod tweets can be very entertaining, occasionally informative, and sometimes breath-takingly incisive. You are certainly aware of people out there in the wider church wanting to know what is going on. (Are you still looking at it, PAs in our office…?) 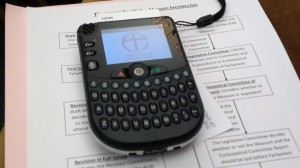 The latest addition to the digital armoury is the General Synod App. This enables people using Apple or Android devices to get all synod papers, and put in requests to speak, electronically. Already, 200 people have downloaded the Apple version. Sadly, bathwellschap uses a Microsoft Surface tablet, so I am excluded. But if you can use it, get it from the Apple Store or Google Play (whatever they may be).

Ooh, and old lags like me will have to get used to the new voting machines: slightly more complex and therefore frightening than the old ones.

And when the evening comes**

I’ll post a brief update tonight, when all the new boys and girls have had their uniform checked, got their registration cards and met all the prefects and teachers.

* We’ve only just begun: The Carpenters 1970 smash about setting out on the journey of a relationship. Yes, I know people say it is smoochy MOR rubbish. But what a voice she had!

**Did you see what I did there? Think Karen Carpenter, last verse of the title song.

And when the evening comes, we smile

So much of life ahead

We’ll find a place where there’s room to grow

2 Responses to We’ve only just begun… *