The big news at Synod is that the timetable for tomorrow has been altered to allow people to watch the football in a guilt-free way. As you will have read yesterday, the innovation of a Saturday afternoon looking at difficult topics in a non-adversarial way was at risk once England had beaten Colombia. Saturday afternoon was likely to be the opportunity for divided loyalties.

But Sue Booys raised a round of applause and some cheering when she announced the timetable was to be re-arrranged. What’s more, they are showing the match on the big screen in the main hall, so we can have a group experience. Twitter had a minor burst of excitement when I accused the applause of being ‘mainly male’: I was reminded that at least two female members claimed to have started the applause. 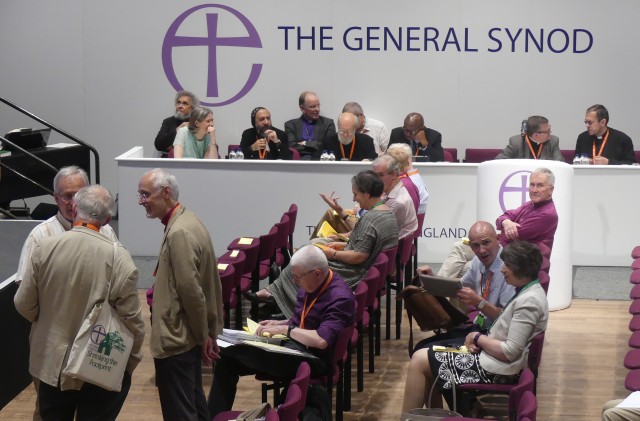 Guests: ecumenical visitors get a special row of seats.

Today has been a day of settling in, but not settling down. The formal agenda is slightly routine on Day One: but the content gave vent to some fairly difficult discussions. The welcome to new members is usually a bit of a formality, with polite applause. However, it was more enthusiastic than usual, which I attribute to the fact that the first two new member introduced were Bishop Viv Faull (now of Bristol) and Bishop Sarah Mullally (London). Things have really changed!

“The Church is trying to survive…”

We moved on to welcome overseas visitors. Synod has previously heard from Bishop Humphrey Peters, Bishop of Peshawar and Moderator of the Church of Pakistan, so we are aware of the extreme anti-Christian violence that has marred Pakistan in recent years. Today he gave us a depressing picture of the difficulties for Christians in a Pakistan that is riven with persecution and increasing Islamic fundamentalism. Christians are on the margins politically, socially – and in terms of education. A phrase that hit me, from my comfortable Church of England existence was “The church is trying to survive. The church is trying to exist”.

He explained that on independence, Christians inherited some good facilities, but 70 years later, the authorities are not supporting minority facilities. He invited us to notice how in other parts of the world, the same intolerant tendencies are increasing. Using video clips, he related some simple projects the church ran to encourage better relationships – practical things like training First Responders for emergencies and developing advocacy schemes. There has been some success at this level – and this was his beacon of hope. He wished people in Pakistan to see Christians and other minority faiths as ‘Pakistani Communities’, not ‘Minority communities’.

He has been warned by the security services that he is a target. This is brave Christian leadership. You might want to watch his contribution on the Synod Youtube channel.

It was good to see Archbishop Albert Chama, Archbishop of Central Africa, because as Bishop of Northern Zambia he has been a regular visitor to Bath and Wells. (The diocese is celebrating 40 years of partnership with Zambian Anglicans at a big bash next Saturday. Bath and Wells readers – see you there?) He spoke about the recent assassination attempt on the Zimbabwean vice-President, and asked for prayer for Zimbabwe as the elections fall due and there is a t last a chance for change there. And he advised us as a Synod: “Don’t only concentrate on in-house. Think of us and our issues”

From Germany, Ralph Meister voiced the fear that many of us have – we are living in an age of uncertainty. He reminded us of the uncertainties in our (British and German) lives – Brexit got a specific mention, but he spoke of the whole European climate of populism and nationalism that seems to have taken over from co-operation and working together.

Filling up: Synod members come into the Chamber

I wrote in my preview post that there was a great deal of pressure around the issue of human sexuality and the church. In presenting her report on the agenda, Sue Booys tackled that head on, explaining that the Business Committee had unanimously decided to ‘park’ a number of diocesan and private members’ motions about it. There are two elements to that controversial decision

This did not go down well with some. Jayne Ozanne repeated her view that Synod is being ‘managed’ into avoiding debate on sexuality, and wanted Synod to vote down the report. She listed a number of events that, in her view, showed the Bishops are not listening. The ‘radical Christian inclusion’ that the Archbishops promised after the February 2017 debacle, she said, is empty words. (See here to understand this). She claimed a debate would make Synod a safe place for LGBT Christians, which is it not at the moment. Caroline Herbert from Norwich then put the opposing point of view, backing Sue Booys and welcoming the Saturday workshops as a chance to listen and learn. There were more complaints that the motions had been ‘parked’ and issues were put in the long grass.

It all got a bit tense, and I managed to break the mood by a short speech noting that a minor change in timetabling had brought the early morning Communion to 7.00 a.m. (instead of 7.30) – and hoped this would not prevent people from turning up. I have discovered that prayer at Synod is an important factor in sticking together. One or two people said to me later that they had not realised the time had been changed, and they were not happy. I put the Business Committee on notice to review this after these sessions. 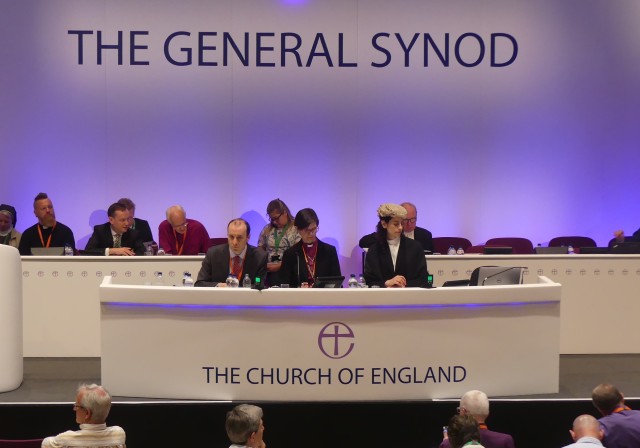 Platform Party: the Bishop of Stockport in the chair.

As I predicted yesterday, there were also calls for proper debate about the various safeguarding concerns. David Lamming (a campaigner on these matters from St Edmundsbury and Ipswich diocese) going so far as to suggest that the Business Committee should reinstate a group of session this November. That did not get approval.

Another theme (which also came up in Questions) was the recent GAFCON conference in Jerusalem. This is a worldwide body of Anglicans who have pulled back from full involvement with the Anglican Communion, largely over trends in dealing with sexuality in North America, though there is also a strong element of ‘preaching the full gospel’ (implying that the C of E has strayed from it). It is quite a divisive subject, but the GAFCON enthusiasts pressed hard for some recognition of what had happened in Jerusalem. They got little change, and I got the impression they do not understand that not everyone thinks the way they do.

When we came to Questions – always a lively start – we went at some speed. Out of 83 Questions tabled, 32 of them were to House of Bishops, of which 11 were on safeguarding and 9 around the various sexuality concerns.

A moment of fame…

I managed to get two Questions in.

One was about the supervision of the company through whom the Pensions Board rent houses to retired clergy unable to buy their own home. I’d been to see a former colleague now in one of these houses, who had a catalogue of poor service and insufficient inspections, meaning her retirement home was not in optimum condition, and required numerous not-very-well-organised visits by contractors. So I asked how the Pensions Board monitored the company concerned. The answer given me was fairly straight by the book, so in a supplementary, I asked whether the Board might increase its direct contact with tenants to check on the quality of service, rather than relying on the contractor’s reports so heavily. The case I had in mind cannot be the only one, as I received a tweet immediately from someone saying that is why they avoided the rental scheme.

My second was a further attempt to get some official celebrations planned for the anniversary of the passing of the Enabling Act of 1919. Abstruse and obscure, you might think. Many Synod members do too. But bear with me. The Act was the thing that moved the Church of England from being almost entirely subject to the government to being a self-governing body. It established Parochial Church Councils and thus hastened the demise of ‘parson and squire’; it formed the Church Assembly, thus bringing Bishops, clergy and laity together to regulate church life for the first time. The Assembly transmogrified into the General Synod in 1970. Diocesan Synods are another of its gifts to us. (Well, you know what I mean…) Under William Temple, later Archbishop of Canterbury, the Life and Liberty movement brought the C of E from Victorian stasis to something with a life of its own, capable of making its own choices. The Act brought all this about, and I believe a centenary is a good excuse to remind ourselves of where we have come from.

I originally (I raised this in February 2017) had high hopes of a book covering the story of how the Act came to be, and its impact on church life, with some choice vignettes of early PCC minutes – which I suspect would be very entertaining. That would require a good historian or two. And I had thought thee might be a celebratory service at St Paul;’s or the Abbey. After all, if the Incorporated Church Building Society can have a bicentenary, why can’t democratic church institutions mark a centenary?

Anyway, the official answer was a disappointment, referring only to the General Synod and not the ‘real church’ in parishes. I politely (I hope) expressed this to William Nye, the Secretary General, who took the point, and managed to make us all laugh with the thought that for many PCCs, it does seem as if their meetings have lasted a hundred years.

Afterwards, two well-meaning thoughtful people suggested that the book would be an ideal project for some enthusiastic semi-retired priest with an interest in the subject. Sadly, it might need someone who actually knows about these things, not me.

If you want to get an idea of the range of Questions that come in, you can see all 83 of them, together with the initial Answers here.

So, that was Day One, Tomorrow will be very heavy on safeguarding. We will be hearing from some victims and survivors of abuse within church life, as well as how the National Safeguarding Team see things developing in the future. The rest of the day is devoted to the various seminars (as I outlined yesterday).

Oh, and the football.

No prizes: but can you name all six Bishops?

*  Football crazy, Robin Hall and Jimmie MacGregor, 1960. Sardonic Scottish song, from the folkie duo who so often appeared in those monochrome days on Tonight with Cliff Michelmore.